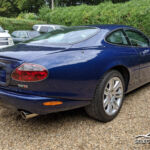 The owner of this car has had 4 XK’s and this shape is of course the best and a future classic if ever there was one. The key of course is finding one that has no rust as this is very difficult in the UK, Japan provides a wonderful source of these and also being Japan the servicing is meticulous and this car benefits from a full service history from Jaguar Japan. This was all confirmed when she was MOT’s here earlier this month and passed with no advisories.. not often you see that on a almost 20 year old car.. the owner did have a new battery fitted though as the old one was starting to get weak and has given her an interim service at the same time.

Being sold new in Japan the cars tend to have more options than the UK base models, so there is nothing really missing from this car and everything works wonderfully. The power and smooth ride just never gets boring. She does not have any of the rattles that you often find on this generation and of course she has the newer 4.2l engine.

The previous owner of this car was a member of the Jaguar Japan owners club and he has tastefully specced the car in a combination that we have never seen before. Over and above this he has also installed an upgraded speaker system with tweeters moulded into the door caps to truly separate the definition in the music. A comprehensive service history is also included along with a full set of keys.

On the body side the bodywork is essentially perfect and it has just been professionally detailed. The owner can have the leaper removed if not to your taste and the only other thing that needs to be done is to replace the front emblem which has become faded and this will be done prior to sale.

If you are reading this and thinking, this car sounds perfect but I am not sure about an import then speak with us! The owner used to think the same before they investigated. The next thing they did was move to Japan and set up an export company. The cars are the same or better spec, have service history, have no rust and generally have lower mileages and are owned by people who can afford to maintain them.. generally.

The mileage on this car is 100% warranted but once you see the condition you will know that anyway.

The owner has been importing / exporting since 1997 and for around a decade lived in Japan running one of the largest car export companies – at the time. This is no longer their main job but a hobby as they go to Japan every year to see the in-laws. Hence they only really buy cars for they really like, not just cars to turn a profit.

The owner has a copy of the Japanese export certificate which warrants the mileage (do not buy an import without this) and the HMRC documents showing UK taxes have been paid along with an MOT and V5.

Need finance? Our approved partner can assist you.

Any cookies that may not be particularly necessary for the website to function and is used specifically to collect user personal data via analytics, ads, other embedded contents are termed as non-necessary cookies. It is mandatory to procure user consent prior to running these cookies on your website.